At Crestone Wellness, clinicians will assess all clients using the Brief Addiction Monitor (BAM), a 17-item, multidimensional, progress-monitoring instrument for patients in treatment for a substance use disorder (SUD). The BAM includes items that assess risk factors for substance use, protective factors that support sobriety, and drug and alcohol use. The BAM produces composite scores for the three aforementioned domains. The instrument can be used in treatment planning, progress monitoring, and group or individual psychotherapies for SUD.

Using ASAM criteria, preliminary medical assessments are conducted by Crestone Wellness nursing staff followed by the History and Physical Examination (H & P) performed by the Crestone Wellness Medical Director. Once the Medical Director has submitted official orders to admit the client based on ASAM criteria for appropriate level of care, clinicians will then utilize the Ask Suicide-Screening Questions (ASQ) tool. The ASQ is a brief validated tool consisting of a set of four screening questions that takes 20 seconds to administer. Led by the NIMH, a multisite research study has now demonstrated that the ASQ is also a valid screening tool for adult medical patients. By enabling early identification and assessment of medical patients at high risk for suicide, the ASQ toolkit can play a key role in suicide prevention.

Following the BAM & ASQ, clients will next engage in the comprehensive biopsychosocial-spiritual (BPS) assessment with their assigned clinician. The nature of this assessment is to collect information concerning an individual’s past and current experiences of substance use and withdrawal; examining an individual’s health history and current condition; uncovering past and current thoughts, emotions, and mental health issues and treatment episodes; exploring current readiness for change; discovering an individual’s unique relationship with relapse or continued use or problems; discovering current living situation/environment and surrounding people, places, things; and presence of a supportive network. Once all BPS data is collected, clinicians will analyze and recommend clinical care based upon identifying risk factors and dimensions to increase quality of life, reducing comorbid conditions associated with SUD.
The BPS will be used to create the treatment plan, identifying all domains of concern with client-specific goals and clinician supported objectives using evidence-based interventions. Individual, daily sessions between clinician and client will be centered on identified areas of concern alongside assessing readiness to change and enhancing motivation to engage in follow-on, clinically recommended services. These recommendations will be crafted in a collaborative discharge plan between client and clinician. Lastly, clients will have the opportunity to participate in daily, clinical program activities focused on Substance Abuse and Mental Health Services Administration’s (SAMHSA) Eight Dimensions of Wellness. These activities include relapse prevention planning, psychoeducation on alcohol and several other drugs of choice, importance of self-care, education on supportive networks and elements of supportive community groups, sleep hygiene, cognitive distortions, mindfulness, breathing techniques, coping strategies, family systems and dynamics, and other elements which can assist the client in the early stages of recovery and sobriety.

Addiction is a family disease, and we recognize that family systems are critical in the desired success of an individual’s recovery. Clinicians will utilize motivational interviewing and assessment throughout programming to offer willing family members education and referrals to clinical services if so identified. 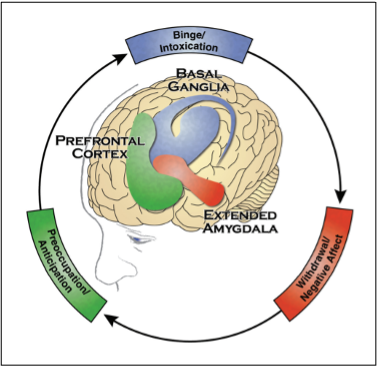 The Addiction Cycle & The Jellinek Curve

Addiction can be described as a repeating cycle with three stages. Each stage is particularly associated with one of the brain regions described above—basal ganglia, extended amygdala, and prefrontal cortex. This three-stage model draws on decades of human and animal research and provides a useful way to understand the symptoms of addiction, how it can be prevented and treated, and how people can recover from it. The three stages of addiction are:
• Binge/Intoxication, the stage at which an individual consumes an intoxicating substance and experiences its rewarding or pleasurable effects.
• Withdrawal/Negative Affect, the stage at which an individual experiences a negative emotional state in the absence of the substance; and
• Preoccupation/Anticipation, the stage at which one seeks substances again after a period of abstinence.

The three stages are linked to and feed on each other, but they also involve different brain regions, circuits (or networks), and neurotransmitters and result in specific kinds of changes in the brain. A person may go through this three-stage cycle over the course of weeks or months or progress through it several times in a day. There may be variation in how people progress through the cycle and the intensity with which they experience each of the stages. Nonetheless, the addiction cycle tends to intensify over time, leading to greater physical and psychological harm.

Foundational behaviors that are associated and central to addiction are impulsivity, positive reinforcement, negative reinforcement, and compulsivity. Initial substance use involves an element of impulsivity or acting without foresight or regard for the consequences. For example, an adolescent may impulsively take a first drink, smoke a cigarette, begin experimenting with marijuana, or succumb to peer pressure to try a party drug. If the experience is pleasurable, this feeling positively reinforces the substance use, making the person more likely to take the substance again.
Another person may take a substance to relieve negative feelings such as stress, anxiety, or depression. In this case, the temporary relief the substance brings from the negative feelings negatively reinforces substance use, increasing the likelihood that the person will use again. Importantly, positive and negative reinforcement need not be driven solely by the effects of the drugs. Many other environmental and social stimuli can reinforce a behavior. For example, the approval of peers positively reinforces substance use for some people. Likewise, if drinking or using drugs with others provides relief from social isolation, substance use behavior could be negatively reinforced.

The positively reinforcing effects of substances tend to diminish with repeated use. This is called tolerance and may lead to use of the substance in greater amounts and/or more frequently to experience the initial level of reinforcement. Eventually, in the absence of the substance, a person may experience negative emotions such as stress, anxiety, or depression, or feel physically ill. This is called withdrawal, which often leads the person to use the substance again to relieve the withdrawal symptoms.

As use becomes an ingrained behavior, impulsivity shifts to compulsivity, and the primary drivers of repeated substance use shift from positive reinforcement (feeling pleasure) to negative reinforcement (feeling relief), as the person seeks to stop the negative feelings and physical illness that accompany withdrawal. Eventually, the person begins taking the substance not to get “high,” but rather to escape the “low” feelings to which, ironically, chronic drug use has contributed. Compulsive substance seeking is a key characteristic of addiction, as is the loss of control over use. Compulsivity helps to explain why many people with addiction experience relapses after attempting to abstain from or reduce use.

The manifestation of maladaptive behaviors, and foundational behaviors described above, are depicted in the Jellinek Curve. This graphic also illuminates one into the dysfunction and toxicity that emanates into an individual’s system, to include family, friends, occupation, responsibilities, social circles, aspirations/goals, etc. Ultimately, all areas crumble and destroy the individual with the pain from consequences-physically, mentally, socially, and spiritually.
Due to the overlapping and debilitating complexities of addiction, brain functioning, and system collapse, Crestone Wellness recognizes that all domains of functioning are in need of repair. Our clinicians utilize the remedies of mindfulness, regulation, creative expression, connection, and community engagement in order to start foundations necessary for long-term recovery. You can find all of these experiential measures within our clinically-crafter curriculum. 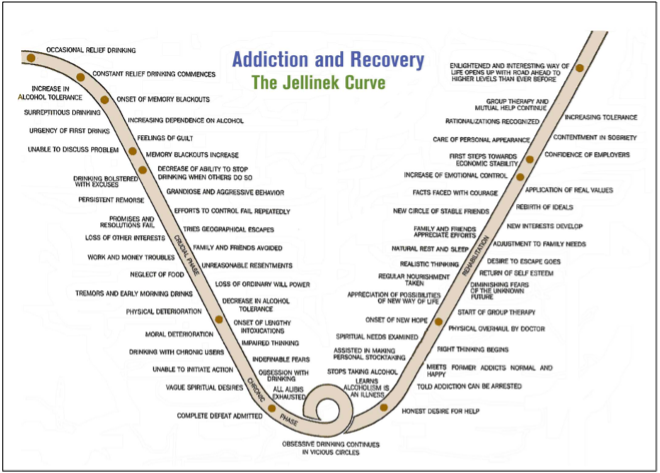